The Group continued to progress until 6th June 1946, when with various pre-war Scouters having returned there was a change of personnel. Mr S. E. (Tiny) Kingett became Group Scoutmaster, Mr. A. C. Hammond, Scoutmaster, Mr. A. W. Sheaf, Cubmaster and Mr. D. F. Summers, Rover Scout Leader. It was reported that there were 61 Cubs, and 18 Scouts of which seven were in a Senior Patrol. The Troop Leader was Ted Mealin, a King’s Scout. Mr. Summers undertook to re-organise the Parents Association.

In October 1946 the Cubs had collected sufficient farthings to hand over £23.10.7¾d. to Beckenham Hospital. There was a second King’s Scout in the Group, Derek Wheatley.

During May 1947 it was reported that £10 had been received from the collection of jam jars. More jam jars were collected and stored in Tiny Kingett’s garage, but the jam makers were no longer interested, and the jars stayed for months in the garage!

At some time during 1947 a Scouters Preliminary Course was held in the Headquarters and a picture of B-P, duly signed by all members on the course, was presented to the Group.

In August the first post-war summer camp was held. It was the last of the District camps and was run in conjunction with the 24th, 43rd and 46th Troops. The camp site was at Ninham’s Farm, Shanklin, Isle of Wight, and was run by the District Commissioner, Mr. B. W. (Bunny) Stewart. This camp was run at considerable financial loss to the Scouters involved.

The only event of note recorded during 1948 was the resignation as Group Scoutmaster of Mr. Tiny Kingett. Mr. A. W. ‘Skip’ Sheaf took over, whilst still continuing as Cubmaster.

Once again for the next two years records have been lost and the next record is shown as 18th May 1950. In those two years there were several changes in Scouters and those present at the meeting were: Mr. A. W. Sheaf – Group Scoutmaster and Cubmaster, Mr. A. C. Hammond – Scoutmaster, Mr. D. D. Murray – Assistant Scoutmaster, Miss L. E. Gaved – Assistant Cubmaster, Lay people also present were Messrs. McCree, Stewart, Clear (Secretary) and Kingett (Treasurer). Later in the year Mr. T. A. C. Stewart (Elk) became the Group’s first Senior Scoutmaster.

Again a blank period in the Group’s history and it is not until 1952 that we can pick up the threads. In this year the Rover Crew was re-formed and Mr. F. Street became Rover Scout Leader. In 1953, two Cub Packs were formed, and with the exception of one year, there have been two packs ever since. 1954 produced a reconstructed Group Committee which had been inactive for some years. Since then the Committee with many changing faces, has made its own special mark on the Group’s history.

In 1955 Mr. Sheaf resigned as Group Scoutmaster, and became a member of the Committee and was presented with an Honorary Group Scoutmaster’s Warrant. Mr A. C. Hammond became Group Scoutmaster and Mr. J. Dawkins, Chairman. In April of this year the Group produced the first of its post-war biennial Gang Shows, ‘It’s a Wonderful Life’. 1955 saw the ‘coming of age’ of the Group and was suitably celebrated in October, with Demonstrations, Exhibitions, a Supper and a Thanksgiving Service.

During 1956 the Group ‘opted-out’ of the Coney Hall and District Parents Association as it was felt that its own Committee fulfilled this function. The Group funds stood at £40 and it was suggested that a scrap metal collection and a waste paper drive be held. The former was dropped but the latter became the first of many organised in conjunction with the Guides. Later in the year the first Senior Scout colours were bought and dedicated. Four Seniors, Grahame Catley, Basil Dawkins, Brian George and Ian Jackson made Group history, by becoming Queen’s Scouts all at the same time.

1957 saw several memorable events in the Group’s life. The Group’s first investment was bought – a £5 Premium Bond! So much equipment was possessed by the Group that the insurance was increased to cover £300. Sometime during this year the 51st (Air Scouts) Group was launched, and to help them on their way, the Rover Scout Leader, Mr. F. Street, became their Group Scoutmaster and two Patrol Leaders from the Troop, Roy Williams and John Collins, transferred to them. In the January, Graham Fuke, a handicapped boy in a wheelchair, was invested in the Troop. Later in the year, in September, he was the central character in a film ‘Scouting with the Handicapped’ made by the County of London. Two boys Richard Wood and Grahame Catley, were selected to attend the Jubilee Jamboree at Sutton Coldfleld. The Group Committee elected Mr. Cruse as Chairman, Mr. Gore, Treasurer and Mrs. Sheaf, Secretary.

At the beginning of 1958, Mr. Alan Hammond finally left the Group after nearly 23 years to become District Commissioner and Mr. Ron Goodman took over as Group Scoutmaster. This required a new Cubmaster to be found and caused an emergency meeting of parents to be held. In spite of a very poor meeting due to inclement weathers two people offered their services, Mr. John Watson and Mrs. Lilian Camp. These two subsequently became Cubmasters, one to each pack. It was decided that the Group Magazine ‘The Burrow News’ be re-issued – this was done and issued quarterly until June 1967. A second trek cart was purchased, when two Patrol Leaders, Bernard Blakemore and Roger Gooch, and the Scoutmaster Mr. Ken Gaved, walked home from Welling with it! During May, approval was gained for the wearing of the rabbit badge on the scarf to signify ‘conies of Coney Hall’. In September, a concrete mixer was hired and a new Scout Hut floor was laid. 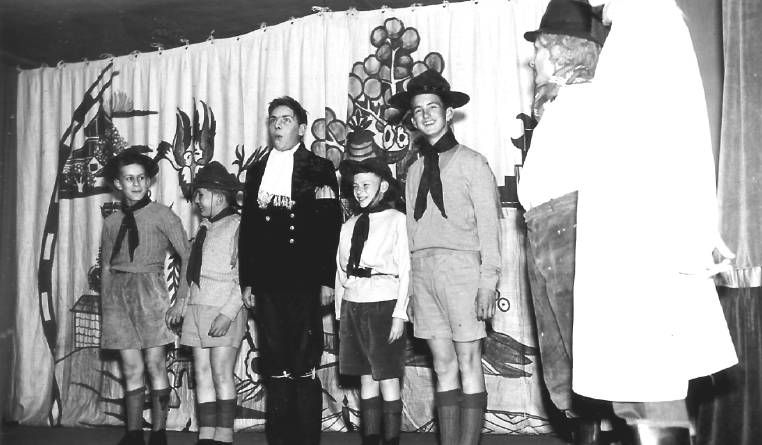 1959 started with £106.8.3d. in hand and it was decided to start a Building Fund for the purpose ‘of either renewing parts of the Scout Hut or building a new one’. £25 was voted to this fund to be invested in Premium Bonds. In May Graham Fuke passed the last qualifying badge for the Scout Cords and was duly presented with them. During the first week­end of October, the 25th Anniversary celebrations included Demonstrations, a Supper and a Thanksgiving Service. These were later voted a success.

In May 1960 new officers were elected on to the Group Committees and Mr. Merry became Chairman, Mr. Humphreys, Treasurer and Mrs. Thomas, Secretary. Later in the year a report was received that the Scout Hut roof was in a ‘precarious state’. Apart from one or two minor adjustments, this remained so until the Group vacated the Hut in 1970!

1961 saw another change on the Committee, and Mrs. Fuke became Secretary. Mr. Ron Goodman resigned as Group Scoutmaster on moving from the District, and these duties were taken over by Mr. Ken Gaved. A further £50 was allocated to the Building Fund and 5% Defence Bonds were bought. The Rector approved an idea to build a new Scout Hut in part of his garden, subject to the approval of the Church Commissioners. Due to lack of Scouters, the Senior Section was closed down. At the end of the year a further £150 was invested for the Building Fund.

1962 started with the Annual Reports being circulated to parents. Due to the fire at the Assembly Halls, the Annual General Meeting had not been held. The Group became a ‘Founder Group’ of Baden-Powell House, having collected a minimum of 6d. per head, and duly received a plaque to commemorate this. The Church Commissioners refused permission for building in the Rector’s garden. Graham Fuke became the first handicapped boy to become a Queen’s Scout in the Local Association and was presented with his certificate by Mr. Leonard Robinson, Assistant County Commissioner for London.

In April 1963, Graham Fuke died, after being a member of the Group for just over six years. The Pack made Group history by winning the District Football Shield for the first time, and in July a Cub Camp was held – the first for ten years. Due to lack of Scouters, and also of members, the Rover Crew was closed down.