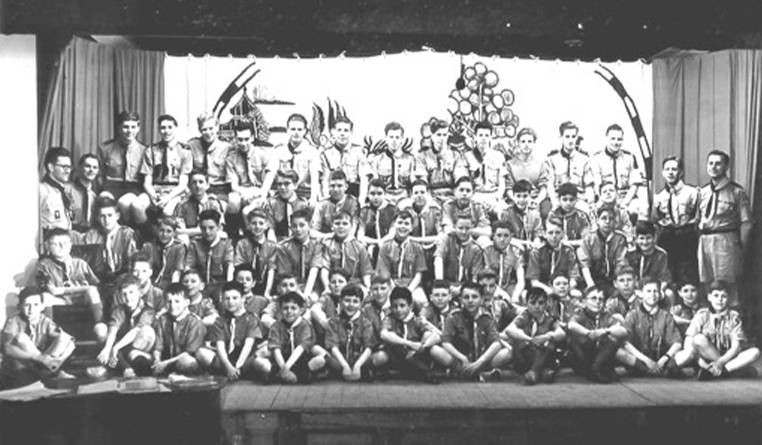 The Scout Group (then called the 41st Beckenham) acquired official status on 5th October 1934. It came about after the then Rector, the Rev. C. A. Page, D.S.O. called a meeting of a few people interested in Scouting. They included the Choirmaster, Mr. William Powell – a distant relative of Lord Baden Powell the founder of Scouting – Mr. S. W. Quaife, Mr. D. F. Summers, and Miss S. Simmons. At this meeting it was agreed that the Group should be a Controlled Group, (now called a Sponsored Group) with the Rector as Controlling Authority. A set of wooden buildings was set aside for use as Headquarters and was situated where the Assembly Rooms Car Park is now.

Leaflets were obtained from Headquarters and circulated to all the occupied houses on Coney Hall Estate. These were part of Kingsway, part of Queensway, part of Chestnut Avenue, part of Cherry Tree Walk and all of Birch Tree Avenue and Church Drive.

As a result of this a general meeting was held to which several boys and their parents came. A talk about Cubs and Scouts was given and the date for the first Troop meeting was arranged.

At the first Troop meeting the Rector, the Rev. Page came and talked about the Religious Policy to be adopted by the Group. The boys were divided into two Patrols of about four each, and spent the rest of the evening on Hayes Common.

The first meetings were held in the Parish Rooms, later called the Rectory Rooms, and demolished in 1971. However, buildings had been set aside for the Group’s use, formerly a cow shed they were later to be called ‘The Hutch’.

Early activities included trips to Frylands Woods where the boys were taught the rudiments of fire lighting, tea making and tracking.

From the first Cub Log Book it is recorded that “the first Pack Meeting was on Wednesday, 31st October 1934, when five small boys met Akela in the Rectory Rooms, this being our Den for the present time, their ages ranging from eight to nearly eleven years”.

The first recorded minutes of the Group were dated 14th November 1934, and those present were Messrs. S. W. Quaife, E. Harmer, and D. F. Summers and Miss Simmons. It was reported that there was ‘4/3d. in hand from subscriptions and donations’.

At the beginning of 1935 it was decided that Messrs. Morrells (the developers of the Coney Hall Estate) be approached ‘with a view of obtaining permission to use the bungalow on the N.E. end of the estate for Headquarters’. It is interesting to note that despite prolonged negotiations nothing ever came of this proposal.

On the 21st March 1935 the names of the original Patrols were recorded as Owls, Eagles and Peewitts. There is an Eagle Patrol in the Troop today, but this is by accident rather than design, as it was not until 1964 that this fact came to light! It was also during this year that it was decided to ‘definitely adopt the Patrol System’, and to institute a Court of Honour.

At the beginning of 1936 Mr. Quaife became Group Scoutmaster and Mr. Summers, Scoutmaster. Sometime in this year the first Pack and Troop colours were bought. In 1937 several new names appeared in the records, although some had been connected with the Group for a while before this. The Cubmaster was Miss E. Gee, Assistant Cubmaster Mr. A. C. Hammond, Assistant Scoutmaster Mr. S. Aylott, Rover Scout Leader Mr. S. Kingett, and Rover Scout Bradshaw. Later in the year Mr. Quaife resigned as Group Scoutmaster, and Mr. Bradshaw took over ‘for a trial period’.

In October 1937 a resolution was passed that ‘The Group should aim to raise £50 towards a Headquarters’. At the beginning of 1938 a Parents and Friends Association was formed and the new Building Fund stood at £18.17.11d. In August of 1938, two Cub Packs were formed for the first time, and in November it was resolved ‘to get the Church Control cancelled and make the Group open’.

During 1939 the Local Association ‘was to be approached with a view to getting West Wickham formed as a separate Association’. (This was again attempted in the late 1950s, but it was not until the Advance Party Recommendations of 1967 that it actually happened!).